What is the ‘Rainscreen Principle’? 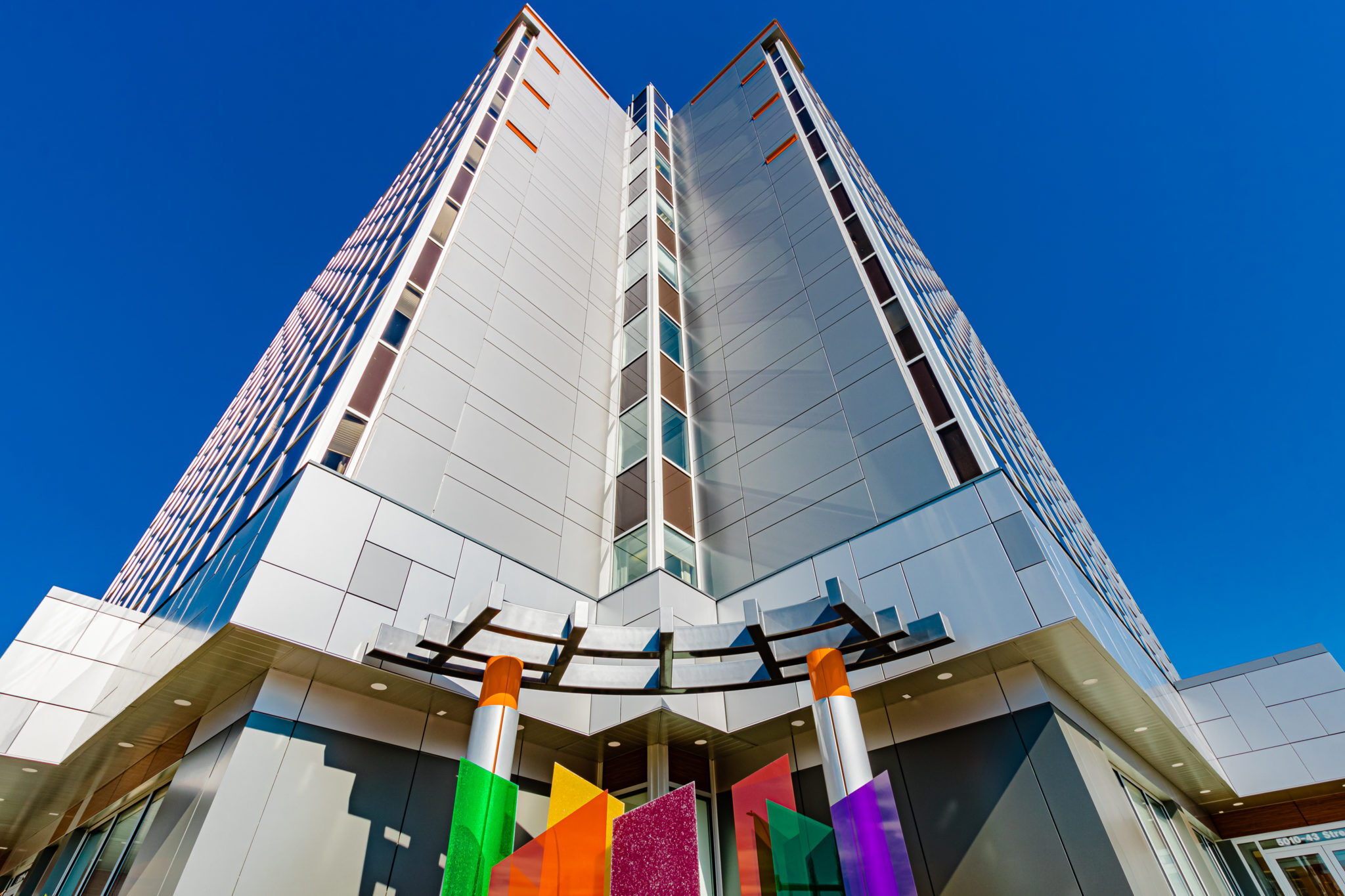 One of the questions we hear a lot and a term that gets used continuously in the façade and cladding industry is ‘What is a Rainscreen?’ or ‘What is the Rainscreen Principle’.

Broken down into simple terms, a ‘Screen’ is essentially a ‘Barrier’. The only difference between the two words is that a screen does let through a certain amount of substance, whereas a barrier is intended to block entry 100%.

So, the ‘Rainscreen Principle’ on a façade or cladding system, means that whilst the majority of rain is drained off the surface of the façade, it is designed to permit a small amount of rain or moisture intrusion between the unsealed façade panel joints.

In this article you’ll discover why it is necessary to allow for this penetration in a rainscreen wall, what a rainscreen actually is and the purpose it serves. You will also learn about the two main types of rainscreen systems, and how to differentiate between the two.

A Rainscreen system is a form of double-wall construction that uses an outer layer to keep out the rain and an inner layer to provide thermal insulation, prevent excessive air leakage and carry wind loading.

The outer layer has open (unsealed) joins that permit some moisture intrusion. It also sheds and controls rainwater but doesn’t completely exclude it. The first or outer layer stands off from the base wall, creating a cavity (the air and vapor barrier) between the base wall and this first layer.

The inner layer is completely sealed, stopping any water that makes it past the outer barrier. This inner layer performs multiple functions; the building structural (or base) wall, the Weather Resistant Barrier (waterproof material), insulation and the air and vapor barrier.

Note: A facade that does not stand off from the base wall (also called sheathing or substrate) to create a cavity is not a rainscreen.

The idea behind the Rainscreen Principle is that by not being completely sealed, as in a Dry or Wet seal cladding system, is that it allows for the façade to ‘breathe’. The outer layer is used to keep out the rain, whilst the air and vapor barrier (or cavity) removes any water that penetrates between the panel joints through drainage and evaporation. The structural frame of the building (the base wall) is kept completely dry, as water never reaches it or the thermal insulation.

The volume of penetrating water varies depending on the rainscreen design. There are two options: the Drained and Back Ventilated or D/BV Rainscreen and the Pressure Equalized Rainscreen or PER system.

Both options use the principle of controlling water penetration but not necessarily stopping water intruding through the exposed outer layer. The inner layer design is treated differently based upon the chosen approach.

Drained and Back Ventilated or D/BV Rainscreen (AAMA 509)

A well-designed, tested, drained and back-ventilated rainscreen system can stop over 90% of the water that could potentially reach the air and vapor barrier of the building. The remaining less than 10% of water is gradually dissipated through the combined action of gravity (drainage) and air circulation (evaporation).

Water droplets are not driven through the panel joints or openings because the rainscreen principle means that wind pressure acting on the outer face of the panel is equalized in the cavity. Therefore, there is no significant pressure differential to drive the rain through joints. During extreme weather, a minimal amount of water may penetrate the outer cladding. This, however, will run as droplets down the back of the cladding sheets and be dissipated through evaporation and drainage. (Weep Holes).

Note: Because the cladding layer does not block the outside wind pressure (it just transfers it to the compartmentalized cavity), the air and vapor barrier must be designed to absorb the wind load.

We have found that the simplest explanation to the difference between the Drained and Back Ventilated or D/BV Rainscreen and the Pressure Equalized Rainscreen or PER system is very aptly defined by J.M. Anderson and J.R. Gill in their book Rainscreen Cladding: A Guide to Design Principles and Practice:

“The Rainscreen approach to weather protection is developed into two distinct techniques.

First, there is the drained and back-ventilated Rainscreen, which involves draining off most of the rainwater at the outermost surface of the wall and providing for cavity drainage and evaporation of the remainder.

Second, there is the pressure-equalized Rainscreen. Here, the aim is to eliminate penetration through the Rainscreen not by tightly sealing joints, but by leaving some or all of them open to the passage of air but not of water.

Both approaches can work successfully, but care must be taken that the two are not confused, since the adoption of hybrid versions can result in unsatisfactory performance.”

We have highlighted the sentence above as this is a really key point. Unfortunately, the term “rainscreen” has been generalized and consolidated in specifications as one conjoined product/term that combines the characteristics of both drained/back-ventilated systems and pressure-equalized systems.

To further complicate and confuse matters, the air and water resistance criteria from the traditional single-line barrier systems has been applied to the design and specification of the exposed outer leaf.

As you will understand, placing air- and water tightness criteria on the outer leaf contradicts the underlying fundamentals of the rainscreen principle.

If you have any queries about Rainscreens or the Rainscreen Principle you can contact our expert, Debi Robins at debi.robins@fairview-na.com.

Should I specify an MCM manufacturer or a fabricator?

What is Engineered Metal Plate?