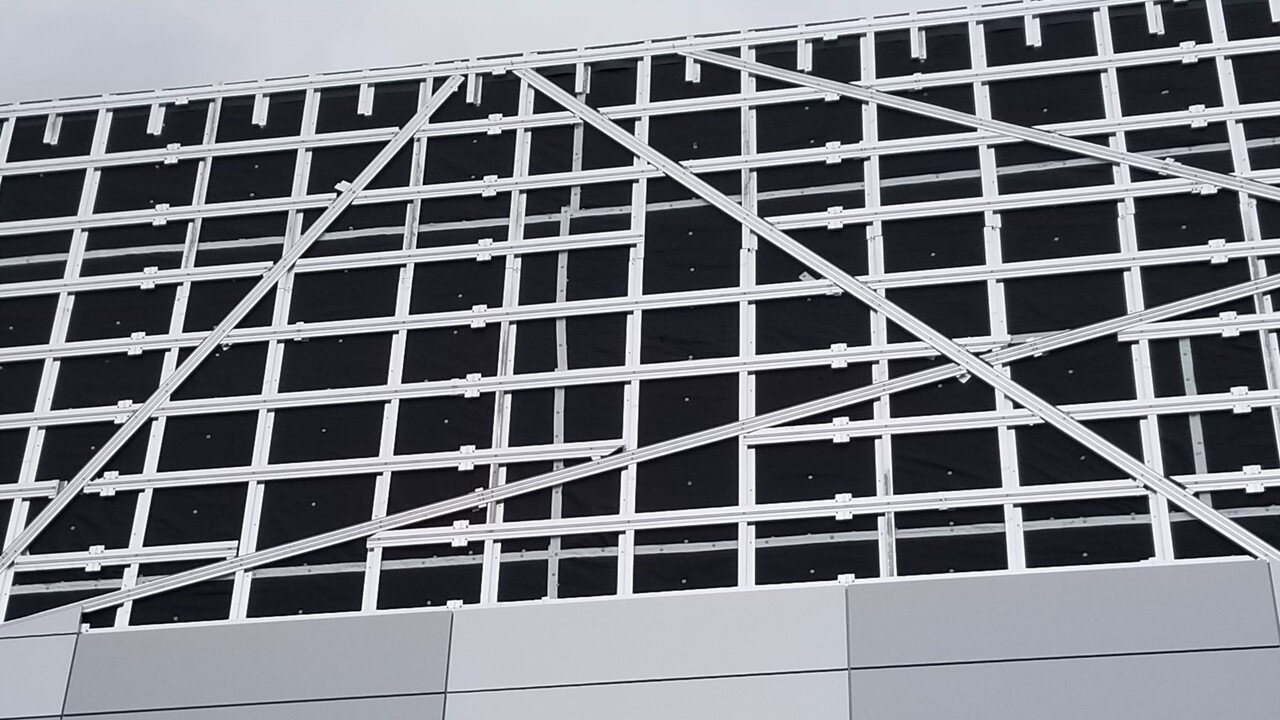 In simple terms, it is just as it sounds… a screen to protect against the rain. The majority of the rain and moisture is prevented from penetrating into the wall assembly. The water is allowed to drain out and moisture can easily evaporate from an air cavity behind this first line of defence.

There are two main types of rainscreen systems:

The drained and back ventilated rainscreen system is simple, allowing water and moisture to escape from the air cavity between the cladding and the interior wall assembly.

The pressure equalized rainscreen system is a little more scientific. The air from outside the cladding is allowed to enter and pressurize the “compartment”, thereby blocking the infiltration of water.

When did the Rainscreen Principle begin?

The rainscreen principle is not a recent idea. In fact, the concept of a rainscreen system dates back to medieval times. Illustrations can be seen in churches constructed with wooden rainscreen cladding in the typical Norwegian wood and stone architecture. A stave church in Urnes, Norway, built around 1130, is one of these historic structures that are still surviving. It is recognised as the first use of an architectural rainscreen.

These earliest rainscreens were created through experimentation rather than through scientific research, with wood cladding, using tight seams between boards, leaving an air cavity behind with ventilation at the top and bottom of the facade to enable rainfall to flow away and moisture to evaporate into the eaves above.

When did the modern rainscreen systems start to be used?

In the 1940s further research concluded that using rainscreen cladding was the best option for exterior wall assemblies, because walls constructed of porous materials will eventually crumble if exposed to moist weather conditions for an extended time without being protected by a water repellent. Covering these porous materials with an impervious product would result in the ideal conditions for mold and mildew, so there had to be a path for water to escape and moisture to evaporate. With a rainscreen, the moisture evaporates due to natural convection in the air cavity between the rainscreen and substrate.

The “double layer” construction of this type of wall assembly has an outer surface to control, but not completely prevent rain and moisture penetration.  The interior element of the wall assembly provides the insulation value, limits air leakage from inside the building, and prevents vapor penetration into the interior of the building.

When was the Pressure-Equalized Rainscreen concept developed?

The simple concept of a “drained and back-ventilated” façade needed improvement to resist moisture being driven into the air cavity as a result of the air pressure differential from the outside to the inside of the cladding. The idea of balancing the air pressure between the air cavity behind the rainscreen and the outside air was introduced by the Norwegian Building Research Institute. Through the 1960s and 1970s, rainscreen concepts were still being developed, evaluated, and verified with the official design of pressure-equalizing published in 1971 by the well-known Architectural Aluminium Manufacturer’s Association (AAMA). Today the rainscreen systems that comply with these standards are known as AAMA 508 Pressure-Equalized Rainscreen Systems or AAMA 509 Drained and Back Ventilated Rainscreen Systems.

For examples of these rainscreen systems, we recommend looking at our Arrowhead Panel Installation Systems or contacting our team for more information.

What are the processes in the Supply Chain for coated metal panel products? (Vitrabond®, VitrabondG2®, Vitraplate® and Edgeline®)